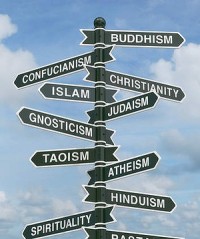 It has become popular to lay all of the suffering of the world at the feet of religion claiming, “It’s all you fault!” Check in with any of the various neo-atheist or “spiritual but not religious” voices you may hear and you are likely to hear this criticism laced with various degrees of vitriol. After all, it is said, the Crusades, the Inquisition, and colonial conquest were all carried out under the banner of religion. Religious fundamentalism as expressed by Branch Davidians, Jonestown, and radical jihadists have created violence and suffering in the name of God. The Church has done significant harm to individuals and whole groups of people because they were deemed inferior or unfaithful. All this is true. It is shameful.

Lillian Daniel, in her book Tired of Apologizing for a Church I Don’t Belong To, says this line of argument seems a little like saying that all roads are bad (and should be banned) because of the helpless creatures that fall victim to traffic. “…don’t point out roadkill and then tell me that `the road’ has it in for bunnies, deer and armadillos.” (p. 17).  Yes indeed, people have used the name of God to justify all sorts of suffering and evil. But then, people have found ways to slaughter millions in the name of not believing in God, too.

Rabbi Jonathan Sacks notes: “In the course of the nineteenth and twentieth centuries three substitutes for religion emerged as the basis for new identities. One was the nation-state. A second was the ideological system. The third was race. The first led to two world wars, the second to Stalin’s Russia, the Gulag and the KGB, and the third to the Holocaust. The cost of these three substitutes for religion was in excess of a hundred million lives.”

The source of evil in the world is not religion, government, or any other human institution in and of themselves. It is the human element that corrupts. Our innate desire to have power over others and to justify ourselves at the expense of someone else, what the church calls “original sin,” is what corrupts. While the Crusades were taking place, St. Francis of Assisi was helping birth a reform of the church. The punishing fundamentalism of the Inquisition finally gave way to the Reformation. The struggle between good and evil does take place on the world stage. Through fundamentalism and manipulation, many co-opt the traditions of the faithful (which is religion), for evil purposes. The war, however, is rooted in every human heart. All of us are capable of great evil in the name of something. Religion is neither ultimate evil or ultimate good. The variable is that, as Luther taught, humans are simultaneously saints and sinners, good and evil, all rolled into one. So, human institutions will be the same.

To think that evil and suffering would abate if religion disappeared is to believe that something other than human will drives a great deal of the suffering of the world. I think this is naive. The appeal to science and technology as the “salvation” of humanity is to ignore that every great advance and progress humanity claims has also been co-opted to kill and destroy. Industrialization was manifest in the trenches, tanks, chemical weapons and machine guns of the First World War. Nuclear fission paved the way to Hiroshima and Nagasaki in the second

Finding our human identity as beings rooted in the source of being; releasing ourselves from the tyranny of constant comparison, self-justification and self-hate is the only way to address the evil and suffering around us. For more time than we have measured, that undertaking has been a healthy religious undertaking.